I teach, so I know how much work it is to keep kids both entertained and learning. It’s even harder during the COVID-19 era, where public health also demands we keep our space from one another.

I hesitate to set up face to face events, but I also feel for kids, especially my nieces and nephew. With schools closed in our state as of last Friday, I know they’ll be climbing the walls in short order, – if they aren’t already.

So I started thinking of ways to play with them without either of us having to leave home. And Aabie was born. 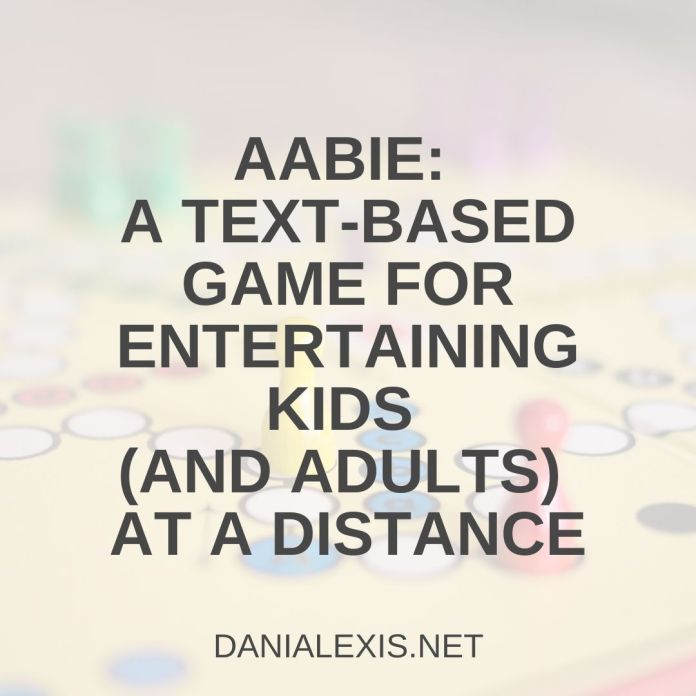 Aabie is a trivia game that can be played over text, messaging apps, social media or even email. It can be adapted for players of any age, though I recommend a minimum age of “has started spontaneously sharing interesting facts they know.”

Because it was inspired by my eldest niece, I also named it after her. Specifically, “Aabie” is named after her initials: AAB.

Here’s how to play.

A turn begins when one player gives another player a Topic. Topics can be just about anything, but do try to choose a Topic the second player is likely to know something about – at least at first. For instance, I might text my 11 year old niece the Topic “Butterflies.”

On hearing the Topic, the second player responds with three facts they know about it. For instance, my niece might reply with:

The responding player gets one point for every fact they provide that is in fact a true fact.

The responding player then gets to announce a Topic to the first player. If more than two people are playing, set up a round-robin so that Player 2 then gives a Topic to Player 3 and so on.

Play continues indefinitely or until we can all return to our usual lives.

If the first player (the one who provided the Topic) thinks one or more of the responding player’s “facts” are suspect, the first player can say “Challenge,” followed by the number of the challenged fact.

In this example, I might reply to my niece with “Challenge #3.”

To get the point for that fact, my niece will have to provide some evidence that the fact is true. For instance, she might send me a photo of a page from her science textbook, showing the results of a study on butterfly music preferences. She might send me a link to an article. And so on.

If the responding player can back up the challenged fact with evidence, they keep the point for that fact. If they can’t, the player who challenged them gets the point.

Disputes over the veracity of sources are settled by a discussion of what makes a trustworthy source in the particular Topic area. If the dispute cannot be settled, neither party gets the point.

Some options for adapting the rules in order to accommodate younger players, encourage further learning, and so on:

Feel free to adapt the rules as needed for whoever you’re playing this game with. Remember: the goal is to keep players interested, talking to one another, and having fun. If it’s not fun, it’s time to take a break.

Oh, and please wash your hands.

If Aabie helps you stave off cabin fever, feel free to buy me a coffee of thanks. And please share this post on social media!