Ah, Florida Man. Whether it’s the result of Florida’s generous public records laws, the diverse population of the Sunshine State, or its staunch commitment to underfunding mental health treatment, the “Florida Man” meme is a…something…to behold.

One of the best parts of Florida Man is that no one can predict his wacky antics. Except maybe…predictive text?

I compiled the first 20 Google News results for “Florida Man” on April 27, 2020 into a text bank and fed it to Botnik. Here’s what predictive text predicts Florida Man will get up to next. 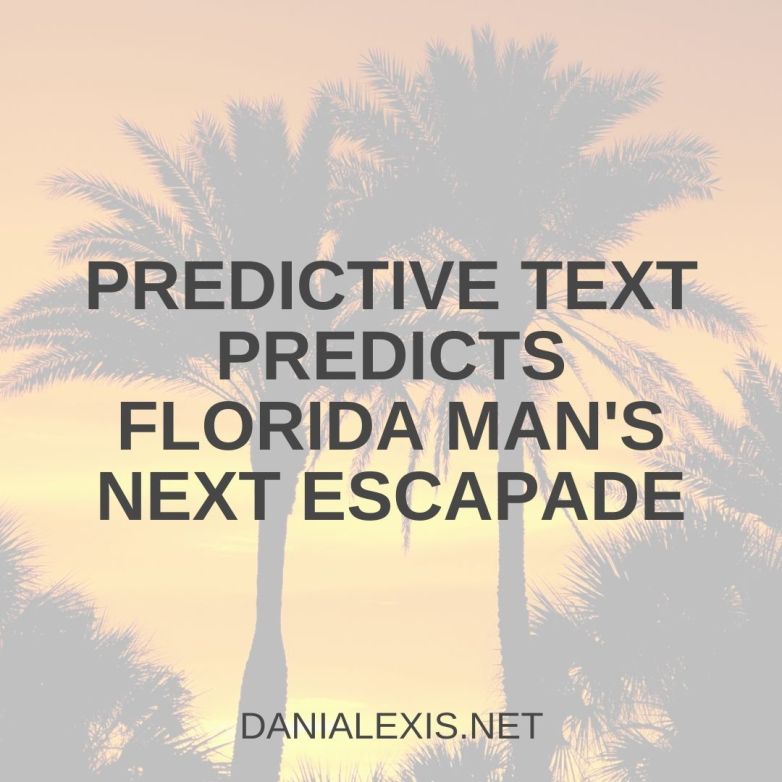 A Florida man tried to avoid work in the coronavirus pandemic but was caught by officers who discovered him with a duck. Reports said he confessed to putting a fake name on his Twitter.

A Florida man claimed he owned several pink diarrheal tablets. Advocates of church cruelty said he was upset because the golfers were very rude.

A Florida man was arrested Tuesday after being accused of shooting his friend while smoking marijuana. After deputies responded to the threat, they drove off.

“It’s like medication isn’t even being called that,” claimed the sheriff. “Between you and me, anti-sales messages are worthless.”

Florida Man Wanted on Charges of Violating His Car

A Florida man who allegedly discovered his cat in a blue Chevrolet has been identified as a 22-year-old victim of spite. Along with reckless driving, his charges include talking about this crazy stuff and dumping water onto his brother.

“Florida prisons are stressful for no legitimate reason,” said the man, when he was asked to explain his nightly medication. “That’s why I don’t go to jail without a fake license.”

A 74-year-old Florida man says he bought 203 arrows, but that he couldn’t afford a firearm. He said he also has extensive criminal warrants for some unknown reason.

Warrants for his arrest included a church golf course, coronavirus news and eluding groups of teens.

A police spokesman said he actually had no excuse for making dinner donations without a firearm.

A Florida man asked a stranger about trying laxatives Monday, according to emails forward to Buzzfeed by the beach president.

“He shocked himself,” said a lady. “To his brother, he was just a bad person, but he was also my wife.”

An address led to a small bridge outside Miami, where Florida police identified the man as a suspicious person.

In a mad rush of spite, a Florida man summoned his inner Florida Man Saturday when he mistook someone walking into a house for a church pandemic group.

“I linked to help on the sand plane as well as I could,” said the man, a 70-year-old postal abbreviation. “And if you like living, you’ll ask another person for assistance.”

Police are investigating whether this news report is prohibited in Florida.

A Florida man tried to apply for assistance but was charged with possession of yard signs Thursday night, according to Deputies with Drugs.

“Violating the law is a sociologist thing to do,” said the sheriff. “Because not enough people are asking for 9,000 dollars during the coronavirus pandemic.”

The man’s name was not disclosed because he is a sociologist.

Help me make better choices than Florida Man: buy me a coffee or share this nonsense on social media.