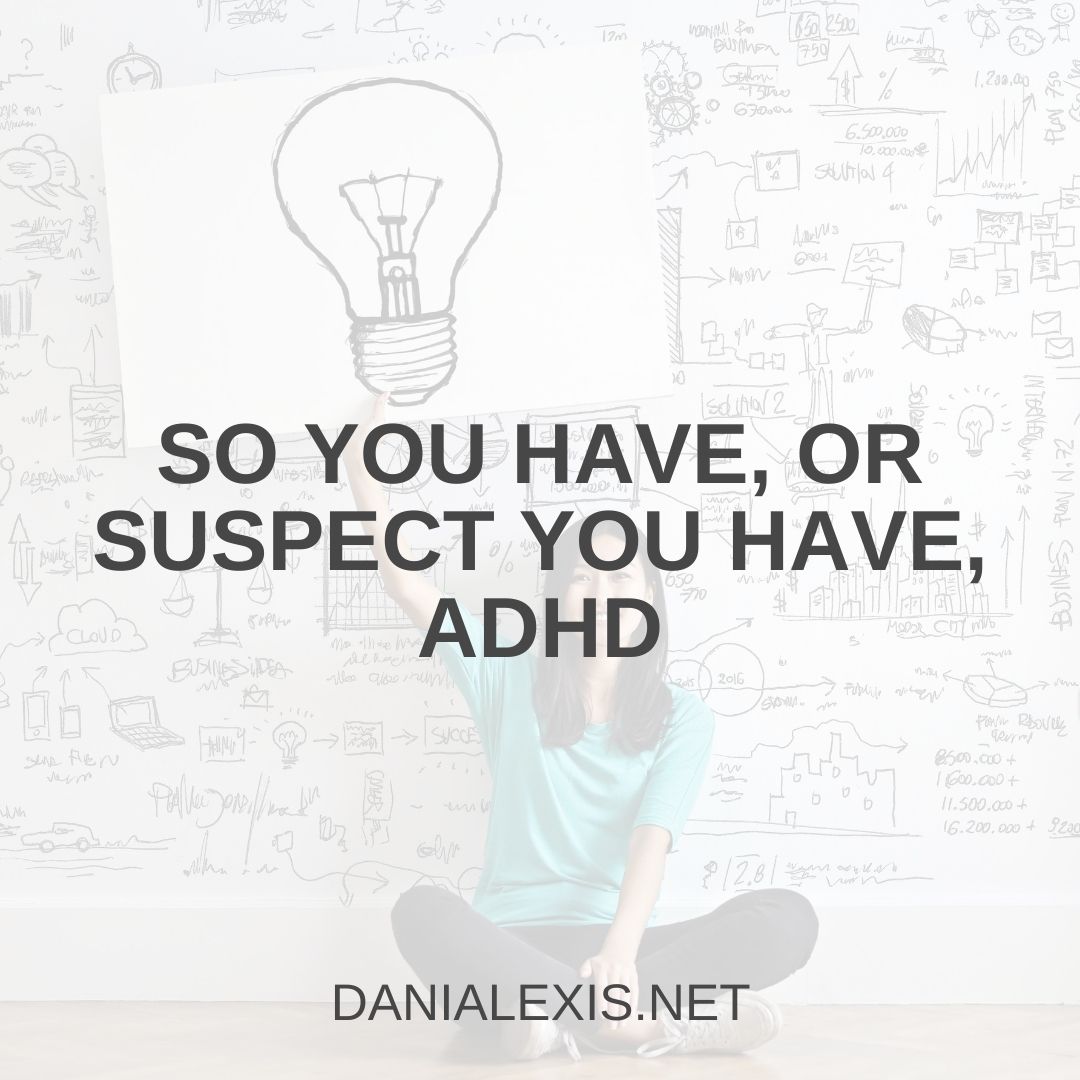 I recently earned the dubious honor of being named a Quora Most Viewed Writer in the topics “ADHD” and “Adult ADHD.” As I understand it, that has more to do with the fact that I write about these topics a lot than it does with the actual quality of my answers.

The biggest category of questions, by far, is the “I’ve just been diagnosed with, or suspect that I have, ADHD” category.

I find myself fielding answer requests to questions in this category over and over. Since my answers to the most common iterations are always the same, it made sense to list them somewhere for posterity. Think of this as a FAQ for Folks Who Have, Or May Have, ADHD and Holy Crap What Does That Even Mean.

I took an online test and it said I probably have ADHD. What do I do?

First: No online test is sufficient to diagnose you with ADHD. For that, you need a doctor, psychologist, or similar professional with experiencing in diagnosing ADHD – and you’ll probably need to take one or more tests that can’t be administered online. So take that online result with a grain of salt. (After all, you can just as easily find an online test that will “diagnose” you as an Idaho potato or as Dorothy Szbornak.)

If you took the test because you suspect something is up with your brain and you wonder if ADHD is its name, schedule an appointment with your primary care doctor (or your psychologist if you happen to have one already). Bring along the results of your online test. They’re not official, but they can serve as a good conversation-starter.

Talking to a doctor is optional. If you don’t feel like the answers you gave on the test or its results are any big deal, you don’t have to make an appointment.

If you think the results are a big deal but you cannot talk to a doctor for any reason, Googling “non-medication treatments for ADHD” may give you some ideas about how to rearrange your life to better accommodate your brain. The good part of these interventions is that they often help people stay more organized and focused whether or not they have ADHD. So even if you don’t qualify for an official diagnosis, you’ll still be doing something good for yourself.

How did this happen? Did I give myself ADHD? What did I do to deserve ADHD?

ADHD is a neurodevelopmental difference: It is a specific type of way the brain forms in utero that is different from the way most brains form. Your brain was structured for ADHD before you were even born.

ADHD doesn’t happen “to” people, any more than having blue eyes or particularly small hands happens “to” people. You can’t give yourself (or your baby) ADHD, nor can you “catch” ADHD from some outside source.

There’s a lot we don’t know about how or why, exactly, ADHD forms. There does appear to be a genetic component – namely, if you have one or more relatives with the same symptoms you have (whether or not they were ever diagnosed), there’s a higher chance that you’ll have ADHD too. But some cases of ADHD appear even when there’s no obvious genetic link.

Does this mean I have a mental illness?

No. ADHD is not a mental illness.

Why do your feelings matter? Because mental illnesses are typically defined as conditions that cause “clinically significant distress” to the person who has them.

In fact, this is how psychiatrists and psychologists draw the line between a “personal quirk” and a “mental illness.” If the person isn’t distressed by the symptom, they aren’t likely to be diagnosed with a mental illness. The “illness” part happens when the symptom or quirk starts to interfere with your daily life, even when you don’t want it to.

ADHD can certainly feel like a mental illness, especially if it’s not treated. After all, if you could sit still or concentrate on demand, you probably wouldn’t be looking for answers about why you can’t do that. But even when your distress is managed – usually by managing symptoms – your brain structure will still be different in ADHD’s unique ways. You will still have ADHD; you’ll just have managed ADHD.

Untreated ADHD can also cause or contribute to a number of other mental and emotional conditions, like depression and anxiety. Some of the symptoms of ADHD, like the inability to concentrate or to get started on a task even when you want to do it, also appear in conditions like PTSD for some people. Some people find that they can’t get a reliable ADHD diagnosis until they deal with other conditions first.

What if the doctors want to put me on medication? Aren’t ADHD meds basically meth?

First: Whether or not you try medication for ADHD, and which medications you try, is between you and your doctor. Your doctor will not follow you around and shove pills down your throat.

That said, ADHD meds come in two basic forms: stimulant and non-stimulant. Stimulant medications for ADHD are generally Schedule II controlled substances, which means they’re subject to a lot of rules and restrictions in the United States. (Medications on Schedule II are understood to be addictive, but also to have useful medical properties, so they’re not banned for all uses like those on Schedule I.)

ADHD meds and methampetamine are both potentially addictive stimulants, but the similarity ends there. Meth is a Schedule I substance with no recognized medical value. It is also notorious for doing significant damage to the human body and brain.

Stimulant medications treat ADHD, generally speaking, by increasing the amount of dopamine circulating in key areas of the brain, like the anterior cingulate cortex – the part responsible for impulse control, focus, planning, and response to reward and punishment. (Sound familiar?) By increasing dopamine circulation, the meds help ensure that these parts of the brain have the dopamine they need to function – but not more.

Extra dopamine, beyond what your brain needs to function, is what causes the feeling of a drug “high.” It also leads to greater tolerance and dependence over time, as your brain adjusts to the extra dopamine.

But since ADHDers don’t get extra dopamine from stimulant meds, their brains never make the adjustments that result in tolerance and dependence. Their brains just work like they’re supposed to, because they finally have the right amount of fuel.

Non-stimulant meds for ADHD are generally not controlled substances, but they also tend to be less effective for many people. The only way to know if any ADHD medication will work for you is to try it yourself under your doctor’s supervision.

Am I stupid? Am I retarded? Am I a freak? Does this mean my life is over?

Sadly, these are the questions about new ADHD diagnoses that I field the most. As the choice of derogatory language indicates, they’re very often asked by people who still have a very particular idea of what is “good” or “bad” in the human brain – and they fear ending up on the “bad” side of that fence.

However, ADHD doesn’t mean you are an [insert slur here], because no insult or slur can capture who any person really is. That’s where their power to hurt comes from – the fact that they reduce a glorious complex living human to a single point of derision or hate.

ADHD means nothing about who you are as a person. It means that you think differently and respond to some stimuli differently from most people. It means that ways to accommodate your style of thinking and approach to the world probably weren’t ever taught to you by your parents or in school.

But, if you’ve gone undiagnosed for many years or decades, you’ve probably heard a lot of messages that feed the idea that there’s something irredeemably “wrong” with you. A lot of people with ADHD – even those who were diagnosed and treated as kids – grew up hearing things like “You just need to focus more,” “I can’t believe you’re so lazy,” and “If you’re so smart, how are you so dumb?”

When you first get an official diagnosis and start treatment, you may also benefit from talking to a therapist about your childhood and life pre-diagnosis. An ADHD diagnosis, especially for older teens and adults, tends to stir up a lot of painful memories of being punished or harassed for things that you didn’t know were ADHD symptoms at the time. It’s important to be kind to yourself and to take those stirred-up pains, if any, seriously.

Finally: ADHD doesn’t mean you’re doomed to a life of failure. In fact, getting ADHD properly diagnosed and treated can help you unlock levels of success you always wanted to reach but never could figure out how. Many highly successful people have ADHD; some even use their ADHD to their advantage.

If an Internet quiz told you you have ADHD, you might have ADHD – or you might not. It’s up to you to decide what to do next. ADHD or no ADHD, you remain in charge of your own life.

Found this info useful? Please feel free to share it on social media. You can also contribute to my coffee fund.