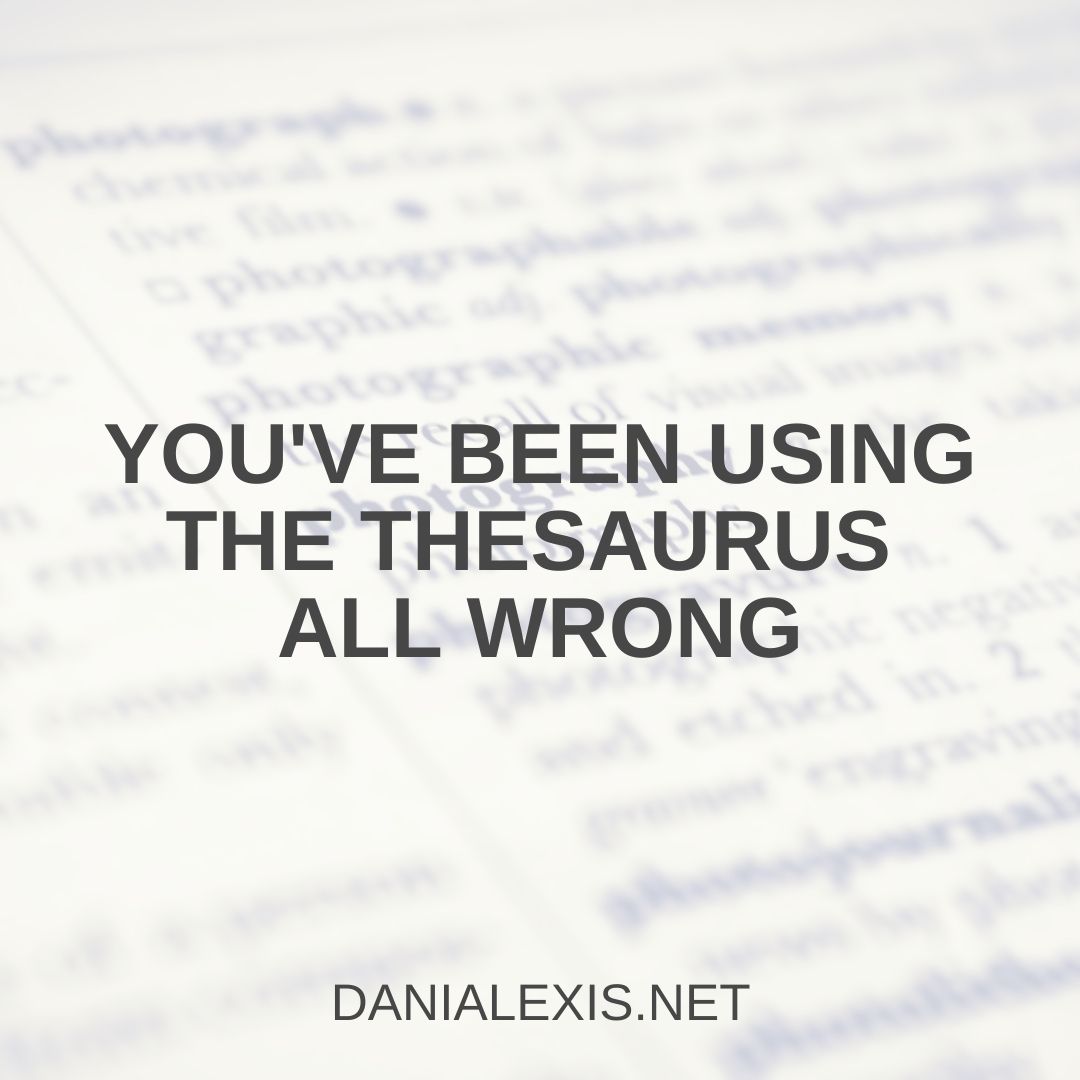 I was taught, way back in elementary school, the same thing millions of other kids were taught: The thesaurus is a big book of synonyms and antonyms. If you want a word that’s like (or opposite) a word you know, you go look up the word you know and use one of the big, fancy words in the thesaurus instead.

Everyone who ever told you this probably had your best interests as a young writer at heart. They were probably doing their best to encourage your love of learning and language.

The Origins of the Thesaurus

Included in this new vogue for Knowing Stuff was a new interest in Classifying Stuff. The Enlightenment gave us Carl Linnaeus, for example, who in turn gave us taxonomy – the means by which we classify living things.

Round about the end of the Enlightenment era, a Scottish kid named Peter Mark Roget was earning his MD at the University of Edinburgh. Medicine was fun and all, but what Roget found he really liked to do was to Classify Things. Linnaeus’s new taxonomy system did some cool stuff for the natural world, but what about the English language?

Peter Mark Roget developed a new passion: Collecting English words and attempting to classify them according to their relationships with one another. It was a passion that would consume most of his life.

Most schoolkids today are introduced to the thesaurus as a book of synonyms (and occasionally antonyms). Many classroom thesauruses today are even presented in alphabetical order, to make it easier for students to look up fancier words they can use to replace perfectly serviceable everyday words so that maybe Teacher won’t notice they didn’t actually read the homework.

Roget is crying in his grave. For shame.

Roget did not give a crap about the pursuit of nickel-word synonyms. His was a much larger vision: A single volume that organized the entire language. Looking at individual words was like examining individual blades of grass when Roget had invited you on a round of golf.

No one has managed a feat like Roget’s before or since. The ThinkMap Visual Thesaurus comes close, but even it is clunky to use compared to Roget’s original, non-alphabetized thesaurus. Most online and built-in thesauruses are unusable for Roget’s purposes.

So How Am I Supposed to Use The Thesaurus, Anyway?

Rather, think of a thesaurus entry as a collection of related ideas. When you look up a word in Roget’s Thesaurus, what you’re seeing are the other most closely-related ideas to that word that exist in the English language. The entries just above and below the entry you’re reading are also closely related, albeit less so. The further away you get from your entry of choice, the less related the ideas are, although every idea in a particular class is related in some way (hint: it’s in the name of the class).

The thesaurus thus offers an extraordinary way to expand one’s thinking on any given topic. For this reason, I argue they’re actually more valuable in creative writing than they are in academic or technical writing.

For example, here’s the entry in the 7th edition of Roget’s International Thesaurus for “keep the peace” (“peace” as a verb):

These are all related ideas, but they aren’t all equivalent ideas. For instance, to “refuse to shed blood,” “keep one’s sword in its sheath,” or “forswear violence” are largely passive: They involve not actively waging war, but not much beyond that. To “beat one’s swords into plowshares” or “pour oil on troubled waters,” by contrast, are active: They involve actually doing something to end current strife or prevent future strife.

What’s the difference? Ask Donald Trump, who tried very hard to justify his own deserving of the Nobel Peace Prize by arguing that he hadn’t started any wars, even though he could have. The Nobel committee rejected this argument, and rightly so: “I didn’t start a fight” is not an active contribution to peace the way “I mediated a dispute” or “I helped give people food so they didn’t have to fight each other for it” are.

For novelists, storytellers, playwrights and poets, too, all of these closely-related ideas are nonetheless different. To “remain at peace” indicates an ongoing state of peace, whereas to “wage peace” or “defuse” indicates the need to transition out of a warlike state. One might “pursue the arts of peace” in either situation (and one might be good or bad at them, or anything in between). “Make love not war” might not be a peaceful endeavor at all, as anyone who has in fact tried to make love well knows.

The great power of the thesaurus is to open up our understanding of a word like “peace” or a cliche like “make love not war” by allowing us to see it in the context of the English language as a whole, surrounded by terms that mean almost but not quite the same thing. The plug-and-play approach to the thesaurus as book of synonyms does the opposite – it short-circuits this kind of exploration and play by (wrongly) reassuring us that any of these words will do just as well as any of the others.

But are “cessation of combat” and “public tranquillity” really the same thing? What about “peace and quiet” and “law and order”? Or “noncombatant” and “citizen”?

I suspect that for most of us, the answer is “no.” Those words and phrases may have related meanings, but they don’t have the same meanings. And exploring the differences within those relations can teach us a great deal about how we think, as well as how we communicate with others.

For more hot takes on 270 year old books, buy me a coffee.