Part One of this post ran in 2011, and it’s always been in the top five most popular posts on this blog. Based on the search terms folks use to find it, it appears that the sequel is both desired and long overdue. So here it is.

Part One covered the basics of appraising the condition of your handbook(s). I highly recommend reading it before moving on to Part Two, since it explains why not every book actually has value as a collectible (and how to tell if your book does or not).

Assuming you’ve already determined that your handbooks are in Very Fine or Fine condition, however, here’s what you need to know about the state of the market.

Which Girl Scout books are worth the most? 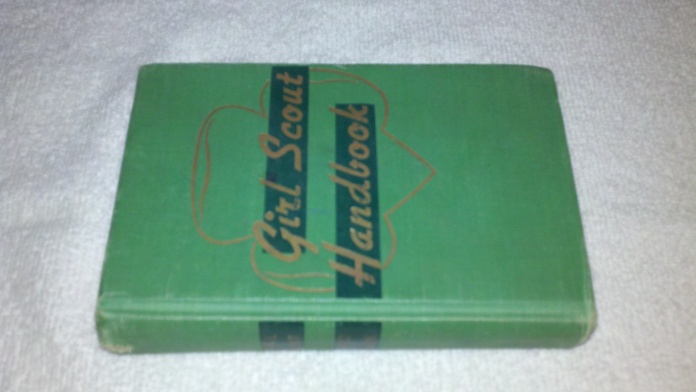 1947. From my personal collection. Background courtesy of our linen closet.

As of late 2018, here’s a rough approximation of which Girl Scout items fetch the highest prices in the rare and used book world and what their price ranges look like:

Items like scrapbooks and photo albums are by far the most valuable, especially if they are well-preserved and provide details about the people, places, and dates shown in the photos/clippings within them. Prices for these items currently run in the $500 to $2,500 range, with higher values typically being set on photographs taken prior to World War II.

As far as price goes, I strongly suspect that Mariner Scout documents also fall in this category. I say “suspect” because I have yet to actually find any for sale.

2. Ephemera from the National office.

Cookie campaign advertisements, brochures from events held by the National office, and similar non-book items fetch higher prices than nearly any book. Currently, most of these fall in the $200 to $500 range (and yes, that means sellers are asking $500 for a single piece of paper in some cases!).

Currently, only a handful of Girl Scout-related books exist that are consistently listed at $100.00 or above – and only one handbook makes that list.

That handbook is How Girls Can Help Their Country, the first Girl Scout handbook ever written, published in several editions from 1912 to about 1917. Most editions I’ve seen on the market are priced at about $150.

How Girls Can Help Their Country was very cheaply produced. At least one edition is bound together with actual staples. Like most cheap books published in the 1910s, it was printed on acid-containing paper. Very few of these still exist, and those that do are disintegrating rapidly. My rule of thumb is to buy any copy I find for under $100 (so far, that’s been one).

If you want to read How Girls Can Help Their Country without investing in one of the delicate few remaining copies, Applewood Books issued a reprint a few years ago.

The other “Girl Scout books” that consistently sell for around $150 apiece are Very Fine copies of Edith Lavell’s and Lilian Garis’s respective adventure series, published in the 1920s and 1930s. If you have one or more with pristine dust jackets, congratulations.

4. Ephemera at the council level.

Songbooks, training manuals, and other items published at the council level typically run anywhere from $0 to $150, depending on the item and the demand for it. Training manuals from National tend to fall into this category as well, rather than category #2 above.

Some old handbooks are more in demand than others, and surprise: they don’t follow any predictable pattern. For instance, handbooks published in the 1940s and 1950s tend to be cheapest to acquire – probably because a lot of them were published and they were the only ones published in hardcover, making them more durable.

The handbooks published in 1994 and in 2001 are selling, on average, for more than the 1940s/1950s handbooks. Copies in their original packaging can easily fall in the $100-$150 range. But before you get too excited: Copies in anything but new-in-the-package condition are selling for about $10 or less, which is probably less than you paid for it in the 90s.

Where can I find up to date prices for comparison?

The best way to figure out how much your Girl Scout handbook, novel, or ephemera might sell for is to look up similar books through used and rare book dealers.

Luckily, there’s an easy one-stop way to do this: AddALL (link opens in new window). AddALL searches several used and rare book databases, and it can give you a look at what’s out there and what people are asking for it.

That said, remember: Used and rare books are ultimately worth only what someone is willing to pay for them. Until you have cash in hand, all you have is a book.

Edward Stratemeyer's Under Dewey at Manila, part of the Old Glory series and one of the few books Stratemeyer wrote under his own name. Also, the newest addition to my personal collection, at $3.50.

But the beauty of scouting books, especially for your own collection, is that you really can do it on any budget and at any price point.  I make approximately $30,000 per year as a freelance writer, and I pay hefty medical bills – yet I can also support my book-collecting habit easily on less than $50.00 per month.

Here are my personal rules for finding and buying collectible books:

1.  If I spend more than $30.00 in any one shop, I’m doing it wrong.
2.  I shall never pay more than $1.00 for a paperback or $2.00 for a hardcover unless I am absolutely certain the book will sell for at least three times (3x) the asking price, or it’s a fair market price for a book I plan to add to my personal collection.

4.  I may only buy as many books as I am physically able to carry to the register in one trip.

Your rules, of course, may vary.  But these are the rules by which I play the game.  Here’s why: END_OF_DOCUMENT_TOKEN_TO_BE_REPLACED

[Wendy] also wore her mother’s long bathrobe and had this crazy-looking fur thing wrapped around her neck.  It had eyes, paws, a tail and everything.

“Animals are for loving, not wearing,” I told her.

“I know it,” said Wendy, “but this thing is very old.  It belonged to my grandmother.  And in those days they didn’t know about ecology.”

Books: they are made from animals.

These days, most books are actually made of some combination of paper, cloth, and/or plastic. Animal products are rare, and mostly consist of various kinds of leather used in fancy-schmancy gift editions (or attempted forgeries). Back in the day, however, animal products were more common than not, and knowing your animals is a big part of knowing how to navigate the world of rare books. END_OF_DOCUMENT_TOKEN_TO_BE_REPLACED